Artist Duo Projects Videos on the Banks of the LA River 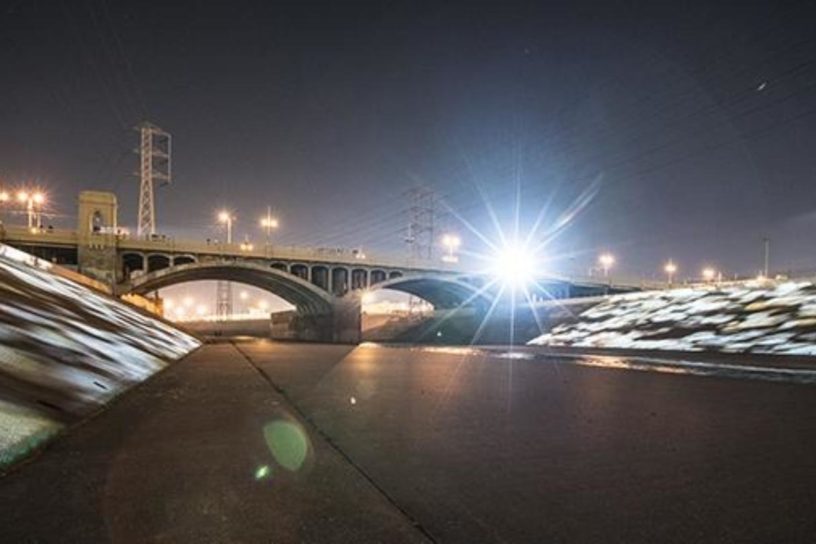 Under LA by Peggy Weil and Refik Anadol is a series of geological projections shown on the LA River as part of CURRENT: LA WATER, a new public art biennial.

You’ll find more than an abundance of questionable, murky water in the LA River this summer: Artists Peggy Weil and Refik Anadol have joined forces to project a series of videos and animations along the 48-mile river until August 14th. Titled UnderLA, the video installation is a commission for CURRENT: LA Water, a public art biennial currently celebrating its inaugural year. With the whole city as a potential exhibition space, the project ended up in two specific locations: the First Street Bridge and at the origin of the LA River in Canoga Park.

The five video sequences projected onto the river depict the inner geological workings of Los Angeles, showing the lithological soil and sediment that lie beneath the metropolis. The videos show a wide range of earthly depth, starting at 10 feet and reaching as far down as 1,400 feet beneath the soil, highlighting over 2 million years of geological development. The work is a meta-unraveling of what makes up Los Angeles; uncovering that which is underneath the city but rarely seen or discussed, displayed on the familiar surface its citizens interact with everyday.

Both of the artists came to the project from distinct backgrounds. Weil had previously worked on a project that visualized the data of global groundwater on signboards in Times Square while Anadol has worked with public architectural installations for the past 7 years, and created an incredible projection mapping show inside the Walt Disney Concert Hall. As two LA residents working in large-scale installations, the LA Public Art Biennial revealed itself as an incredible opportunity to join their two crafts and create a meaningful artistic exploration into the science of their own city. “We inhabit such a small slice of space on land, and yet our lives and society are profoundly affected by our geology,” Weil tells The Creators Project.

The raw and (literally) underground footage of the project was not straightforward to acquire. After all, digging nearly half a kilometer into city soil is neither practical nor legal under most circumstances. Luckily for Weil and Anadol, the United States Geological Survey provided a helping hand: “I assumed there would be a comprehensive CG 3D model of the LA Basin and I reached out to Michael Land, a USGS hydrologist who began a series of conversations about how the USGS maps and monitors the basin,” Weil explains.

“The minute I saw a photo of one of the boxes of soil samples I could see the entire sequence. I was struck by the beauty and variance of the samples and the stories they held. So while these images of layers of rock and silt and sand and clay don’t look like water, this is what water looks like under Los Angeles. It’s our history and it’s our future.”

Armed with footage rarely seen by surface-dwellers and with the city as their canvas, the duo set out to educate their potential audience: “One of the most critical parts of the project was it’s massive potential to create new forms of outreach for Los Angeles. I’ve been a part of many public performances around the world, but I’m always wondering why Los Angeles is lacking public interventions,” adds Anadol. “If we can bring any level of attention and awareness to the importance of water, I highly believe we’ve succeeded. And so far, the audience seems to be heading towards that direction.”

UnderLA will be on view for two more occasions before closing, on August 13 and August 14 from dusk to 11 PM, at the First Street Bridge in Los Angeles. For information on more works in the CURRENT: LA Water biennial, click here.

Doodles Come to Life on a Giant Face 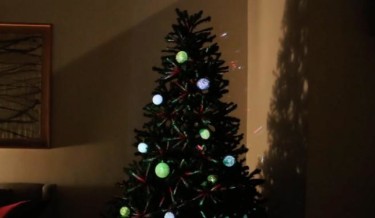 Jan 04, 2016 | Comments Off on This projection-mapped Christmas tree is the Tannenbaum 1895
AV Projects 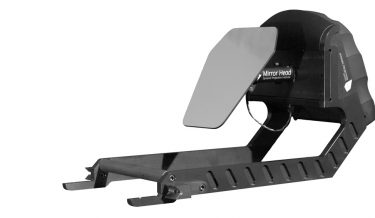