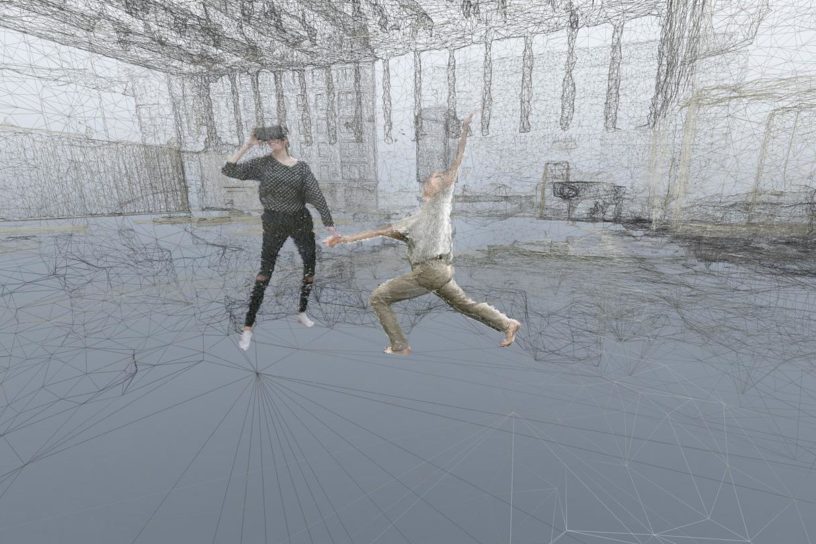 Dust: it gets pretty much everywhere. Now, that includes virtual reality. Thanks to a new immersive dance piece, Dust, by artists Andrej Boleslavský and Mária Júdová that features a Kinect-captured choreographed dance performance translated to VR, which people experience as a dust particle inside a VR headset.

The Prague-based pair say it was inspired by the fact that the bulk of elements that form our bodies and life on earth—carbon, hydrogen, nitrogen, oxygen, phosphorus, sulphur—come from stars, many of which reside at the center of the Milky Way galaxy. It also takes inspiration from notions of the unthinkable and how that relates to our own place in the stars, expressed in American professor Eugene Thacker’s In the Dust of This Planet.

“The initial inspiration came from the idea that everything is formed from stardust, so our bodies are,” the pair explains. “We were interested in exploring how it would be to become a dust particle again, and how it would change our perception of body, space and time.”

In the performance the audience as dust speck is able to float around freely, giving them a unique perspective, and allowing them to see the performance from any vantage point.

“The piece immerses them visually, physically and emotionally. For us, VR was an opportunity to create a poetic and physical experience which makes you reimagine how you can see and experience contemporary dance.”

The pair recorded the performance from different angles using Kinect sensors, meshing them together. The 3D backgrounds they created photogrammetrically. This required taking hundreds of photos of building interiors and architecture. Then segueing them together using RealityCapture software. It was coded and rendered using vvvv.

“To merge real and virtual worlds, we used Kinect depth camera again,” they note. “We basically stream a volumetric imagery into VR, and combine it together with dance recordings and photogrammetric environment in the real–time. It allows us to create an impression that the audience is in the immediate presence of the dancer and within the space where the dance is happening, where the audience and rendered elements coexist and interact.”

Júdová notes that she comes from a dance background, performing in dance since she was a kid. As a dancer she wanted to convey the physicality of medium, the way the body moves around with such purpose but still so freely. Which made the immediacy and immersion of VR such a perfect environment to set their piece in.

Then, giving the audience the unrestricted motion of a dust particle was a comparable way for them to engage with the sequenced movements. It also tied in thematically, especially with Thacker’s ideas of perceiving the world outside of the human-centric experience.

“In the Dust Of This Planet is a fascinating philosophy book in which Eugene Thacker thinks about an increasingly remote point of view (that of the dust, planet, of the cosmos, or even nothingness itself) in order to create a different framework for interpreting reality,” says Júdová. “Basically, the dust is suggested here as a way to think about the unthinkable world, and the limits of our place within it. And I found it really inspiring how he uses this metaphor to let us glimpse into a world so different, that it is difficult to imagine. A world, that makes us rethink our perception of body, space and time. This is what we have tried to achieve in Dust. We’ve created a parallel universe with its own physical laws governing space. A world, in which you experience how your physical body disintegrates into millions particles and you fly around freely and unnoticed. Perhaps a world, which makes you imagine how it would be to see the world from a different perspective.”

Dust was produced by Carmen Salas with the support of the Arts Council of England. Dust will also be touring, see the dates and locations on the project’s website. See more of Andrej Boleslavský here and Mária Júdová’s work here.

Mar 31, 2017 | Comments Off on An Interactive Pond of Computer-Generated Koi Fish Designed by teamLab 2860
AV Projects