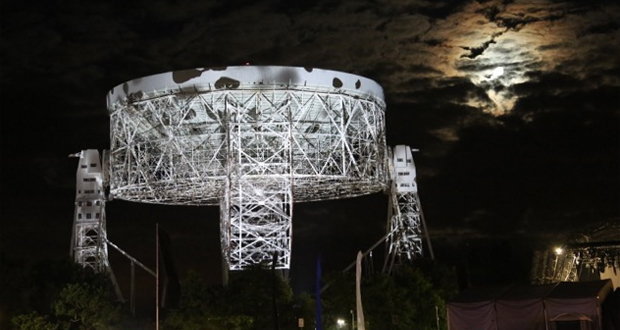 The epic structure of the Lovell Telescope – now in its 60th year of operation – presented a unique and unparalleled canvas for the artists to create this new work. During the festival the dish was in the zenith position, pointing directly upwards into space, receiving radio signals as the Earth turned and the sky drifted past overhead.

A mixture of deep space data collected on-site in real-time, and previously gathered from telescopes further afield – including Planck spacecraft observations of the microwave radio sky – was transformed into Celestial Frequencies, a unique generative audio-visual artwork projected onto the telescope.

Through this visual representation and soundscape, the work offered a rare opportunity to explore the knowledge gathered about deep space at Jodrell Bank Observatory. The artists collaborated with scientists and astrophysics researchers to understand and access the data collected on site.

Between 11pm until 2am on Friday and Saturday, and until 1am on Sunday, festival goers were able to experience Celestial Frequencies from a prime viewing position, immersing themselves in the soundscape – a sonic interpretation of astrophysical data. During these times they also had the opportunity to control the telescope’s observation frequencies, altering the data being observed, and witness live how these manipulations produced a dramatic change in the data visualisation on the dish.