A Pyrotechnic Artwork by Cai Guo-Qiang 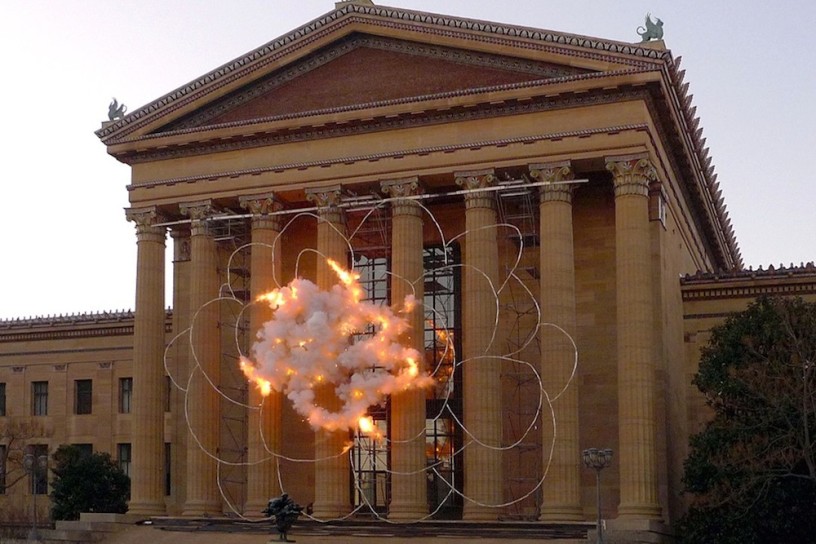 In 2009, Cai Guo-Qiang was commissioned by the Philadelphia Museum of Art to create a site-specific explosion event on the front facade of the museum. The project, titled Fallen Blossoms, used a gunpowder fuse, metal net, and scaffolding to activate a blossom pattern for 60 seconds, temporarily setting the columns of the building ablaze.

The fuse for the flower was lit on December 11 at sunset for a large audience. The title for the event and corresponding exhibition is derived from a classical Chinese proverb “hua kai hua luo” which comments on the extreme loss felt when a life is ended unexpectedly. The title and event were also meant as a tribute to the Museum’s late director, Anne d’Harnoncourt.

Guo-Qiang currently lives and works in New York, but was born and trained in stage design in China. Not limited to one medium, Guo-Qiang works in installation, drawing, performance and video art. During his 9-year stay in Japan he explored the use of gunpowder in his work which eventually led to his large scale explosion events. Guo-Qiang was notably the Director of Visual and Special Effects for both the opening and closing ceremonies of the 2008 Summer Olympics in Beijing. (via cerceos)