A Monumental Sculpture of Colorful Twine Netting Suspended Above Boston

Prev
Next
AV Projects | 06 Aug, 2015 | Comments Off on A Monumental Sculpture of Colorful Twine Netting Suspended Above Boston 2621 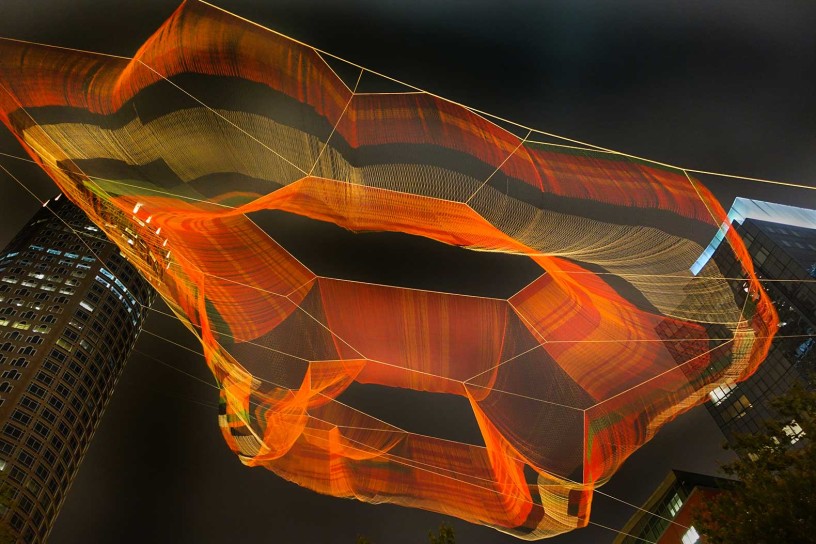 One hundred miles of twine compose this public sculpture of suspended netting above Boston, a structure that spans the void of an elevated highway that once split downtown Boston from its waterfront. The artist, Janet Echelman (previously), designed the artwork titled As If It Were Already Here to reflect the history of the installation’s location. Echelman also intended the piece to be a visual metaphor—a way to “visually knit together the fabric of the city with art,” she explains.

The installation is 600 feet at its widest, including over 500,000 knots for structural support. Each time one section of the sculpture sways or vibrates in the wind the other parts follow suit, undulating as a single form 600 feet in the sky. As the day progresses the 1,000-pound structure’s webbed surface begins to glow, becoming a beacon in the sky rather than blending into the blue above it. In addition to moving with the wind, the structure also glows in response to sensors that register tension and project light onto the sculpture.

As If It Were Already Here is just one of Echelman’s enormous sculptures, she’s also installed pieces in Montreal, Seattle, and elsewhere. Echelman received the Guggenheim Fellowship, the Harvard University Loeb Fellowship, a Fulbright Lectureship, and was named an Architectural Digest Innovator for “changing the very essence of urban spaces.” You can see Echelman speak about her other environmentally-responsive sculptures in her TED talk here. (via Beautiful Decay)