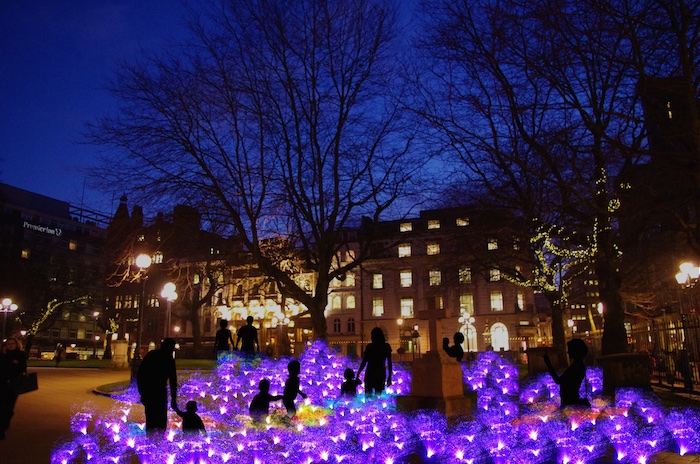 A field of interactive fiber optic lights in rainbow hues has taken over the streets of Birmingham in the UK. The light installation, Midlight, is the brainchild of the British-Chinese artist Aowen Jin, as commissioned by Birmingham Hippodrome CREATIVE to create a public theater experience.

What’s on display here is innovation and participation as Midlight contains thousands of lights, each with 9,000 color variations that can be intelligently adjusted to surrounding sounds. This ensures that no two experiences are the same—using a proprietary beat-learning code Jin developed, each module refreshes every 10 seconds and downloads a new source code for itself every few minutes so that each viewer has a unique interactive experience of sound and color.

The whole installation is also programmed to be reactive to Twitter, with each module using built-in Wi-Fi from a cloud-based server dedicated to Midlight. This server constantly monitors social mentions on Twitter, interpreting instructions such as “@himidlight turn red” which gives participants the power to change a whole field of colored lights through social media interaction.

Jin tells The Creators Project, “Everyone reacts to it differently: Children love to scream and shout and even hit the boxes and see it react and they really enjoy the tactile nature of the fiber optic bundles; younger adults love the social networking integration and the fact that they can change the whole field with a tweet; while older adults often like to spend time more subtly interacting with the work, sometimes talking quietly to it or singing to it.”

Midlight came into existence as a means of unifying the growing relationship between Birmingham and China and to better introduce newer Chinese immigrants into the civic fold. China is the largest export partner for the region, making up $1.4 billion of the region’s exports, four times as much as any other British region. Jin says she conducted research and workshops and found that members of the Chinese community still suffered with language barriers. She says, “I decided that what we needed was something that was instantly accessible, vibrantly attractive, and that engaged with people in a way that transcended language and culture.”

As a public art installation produced to create important community building moments and integration into a city space, Midlight is successful at being immediately enjoyable. Who doesn’t like rainbows you can sing to and whose glowing colors change per your every move, tune, or Tweet? 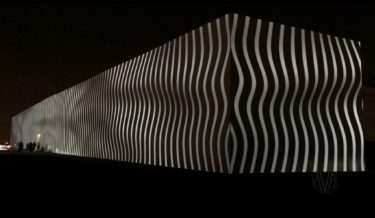 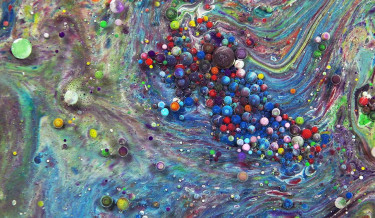 Aug 13, 2015 | Comments Off on Paint, Oil, Milk, and Honey Mix in this Surreal Macro Video of Swirling Liquids by Thomas Blanchard 3239
AV Projects