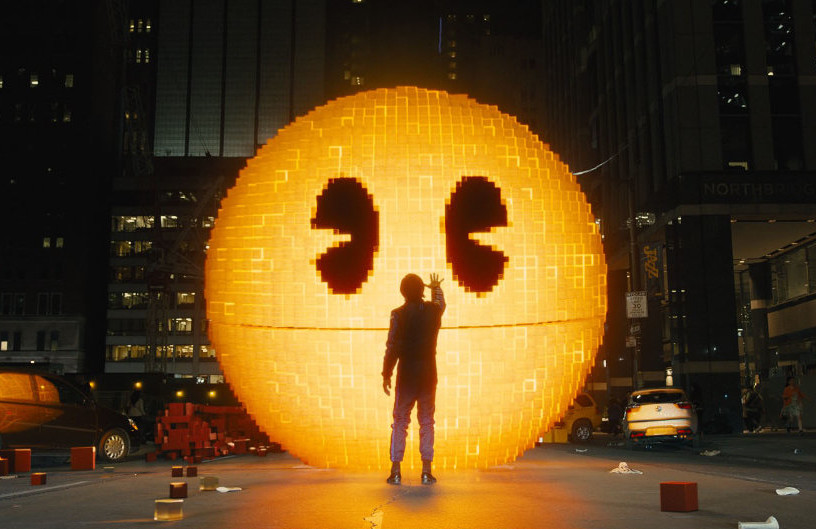 Video game icons conjured up by a hostile alien race go beyond the arcade to wreak havoc upon the Earth. In order to make the premise of Columbia Pictures’ Pixels a cinematic reality, Matthew Butler, overall visual effects supervisor for the action-comedy, teamed with his colleagues at Digital Domain. One of the biggest challenges they faced was that key characters Donkey Kong, Centipede and PacMac had to appear as if they were present in the real world. “Everything was pixelated so all of the characters are made out of these boxes that change per frame,” states Digital Domain VFX supervisor Marten Larsson. “We were creating 3D versions of these iconic 2D characters that are moving in a staccato way.  We had to make Donkey Kong move in a physically plausible way so you ended up with these poses that are not necessarily iconic from the game. Trying to retain the look of Donkey Kong and Centipede through all of that was a challenge. We spent a lot of time integrating them into the environments.  For example, PacMan is casting light on all of the cars, buildings, and streets in order to sit him in the scene.”

“The first thing we started was to voxelize the characters live,” explains Larsson.  “As the character moves through a static space of boxes they would either turn on or off similar to pixels on a computer screen. We did that for PacMan. For Donkey Kong, because of the size of the voxels compared to the features of his face, that didn’t work well because it was hard to control without getting frames that looked weird.  For Donkey Kong’s head we voxelized it in a local space so when he turned his head 45 degrees the boxes turned 45 degrees with his head.”

Making things even more challenging was the fact that the characters were emitting some kind of light. “Donkey Kong is emitting less light, PacMan is on the most extreme end and Centipede is somewhere in-between,” remarks Larsson.  “If you start emitting light you flatten out the character quite a bit.  We would take a Fresnel approach where we retained some of properties of the original character. The light on PacMan would be more intense in the middle and fall off toward the edges to give him some of his shape back.”  Larsson adds, “We were lucky that we got a lot of the night time scenes because it was easier to integrate them and still show the kind of light that they’re emitting.”

A concerted effort was made to ensure that the video game antagonists did not move too quickly, to help convey a sense of scale. “It’s like a fine balance with these characters because we were trying to make sure they had these motions from the video games while maintaining the weight and heaviness,” says Digital Domain animation director Jan Phillip Cramer.  “It was in the details of how you ease in and out of different poses and turns. With PacMan we needed to make sure he felt super aggressive and was fast because he was chasing Mini Coopers or was being chased by them depending on what part of the sequence you’re in.”

“We also had practical effects,” remarks Larsson. “For PacMan they built a crazy looking car for casting interactive light. It was a Mini Cooper with yellow light panels on all sides and a whole bunch of generators on top. That was used quite a bit. Most times we were able to use the interactive light from the car. However, we ran into some cases where the timing didn’t work and we ended up having to paint out both the car and the light it threw.  We had a few cars being thrown around practically in PacMan.  Eddie [played by Peter Dinklage] jumping into the water with his Mini Cooper was also a practical shoot.  Most of the time we knew that anything PacMan, Donkey Kong or Centipede interacted with would mostly be digital.”

“To see real people standing and running around on a Donkey Kong set, that for me was exciting,” remarks Cramer. “The hardest things were the fires that are jumping around in that video game.  They have this super eradicate nature and we had a hard time translating that while giving it weight and logic.  We did 90 per cent keyframe animation and very little simulation.  The only thing that we ended up simulating was the shape of the flame that gets emitted.” Physical props were constructed to assist the cast.  “Barrels were built so everyone had an idea of what they needed to jump over,” Larsson explains. “We had a Q*bert stand-in for eyelines and reference. Obviously for PacMan we didn’t have a practical 16 foot sphere but we had paint polls with temporary rigs that we held up for eyelines and framing of the camera so people knew where things were.”

Additionally, some unexpected digital work was required. “The Donkey Kong set was a red stage with a big greenscreen behind it.  It was a reflective set piece so we ended up replacing quit a bit more than we had planned,” Larsson adds.

“When you watch the movie there’s a part with Max Headroom that we did using Digital Domain’s proprietary facial technology called MOVA Direct Drive,” continues Cramer.  “We got to meet Matt Frewer, the original actor who played him. Using Mova, we shot his facial performance and translated it 1:1 to the digital character.  Back then Matt was trying to make it look CG and now we’re doing the reverse.  We had to make it look real even though it is CG.  That was a fun thing and a big challenge because we had little time to do it. The technology came in handy.”

Figuring out the volxelization process was the hardest aspect for the Digital Domain animation team. “For us it was the first time we were not able to directly see the outcome of what we were doing,” explains Cramer. “The faces would go through a post-production process in Houdini so it would take us quite some time to visualize results.  We had to write some plug-in tools to get a 1:1 representation of the face into Maya.  It was neat because the animator was able to make facial poses and understand what they would look like.”

“I hadn’t done a comedy before so I wasn’t a hundred percent prepared for how many changes that we got,” reveals Larsson.  “They kept re-editing Pixels to make it funnier which makes total sense. But when you’re doing visual effects at the same time, it can be challenging handling so many changes – that along with getting the characters to be approved by all the different parties and making sure they still maintained the video game look were the trickiest things for us.”

One bonus on the project was during principal photography, Larsson got some quality hands-on time with some classic video games. “There is a shot at the beginning of the movie when they’re in a 1980s arcade. They built all of the games so I played a whole bunch of them onset. I ended up spending a lot of time on Q*bert and Missile Command. We all had a great time on Pixels and enjoyed bringing all of the iconic video game characters to life.” 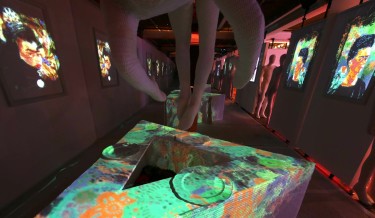 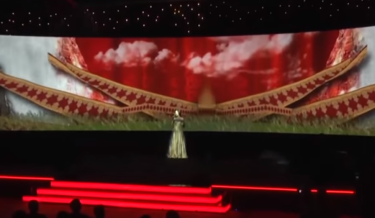